I got an email from Silver Donald Cameron in 2011, thanking me for a supportive comment I’d left on his latest Chronicle Herald column online. He also encouraged me to join his mailing list.

I knew who he was. My Great Aunt Margaret Benjamin Hammer had listed him in the acknowledgements of her book of poetry, Dim Time and History on a Garrison Clock, in 1992. But I didn’t want to gush. I responded and told him I’d sign on to his mailing list so as not to miss a column. At the time, my email signature was essentially a short bio, which I used to let people know I was a writer for hire.

“You’ve got an impressive resume, and I’d like to read your work,” he responded. He wanted to join my email list. I didn’t have an email list. But if Silver Donald Cameron wanted to read my work … well, I started a listserv.

Don and I corresponded for years, via mailing list and individual responses. Eventually I had the privilege of helping him with some writing projects, including writing bios for a while for The Green Interview, his “series of in-depth conversations with the thinkers, artists and activists whose ideas and work are leading the way to a new era of sustainability.”

We became friends, interviewed and wrote about each other, had coffees and lunches and befriended one another’s wives. As a self-employed writer, he was the thinker after whom I modelled myself. We shared the same concerns and a similar worldview. Time and again I turned to him for advice, on how to set prices, dealing with difficult clients, find new markets, structure nonfiction, choose among emerging technologies–he always generously obliged with wisdom and insight. What a lucky privilege, to have been able to pick the brain of a mind like his.

His 82 years are impossible to summarize. He was too active, accomplished too much. A few lines simply can’t do him justice. But I will note some highlights.

He was born in Toronto but grew up in Vancouver, later receiving an MA at Berkeley and Ph.D. at the University of 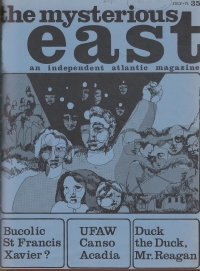 London. While working as an English professor at the University of New Brunswick, he founded The Mysterious East, an alternative news magazine with a critical perspective.

He made his home in Isle Madame Cape Breton in 1971, drawn by the tight community there. Building a closer sense of community drove Don throughout his life.

There he wrote some of his most popular books: Wind, Whales and Whisky; The Education of Everett Richardson; and The Living Beach. Twenty books in all.

He also wrote novels, a play script and numerous dramatic radio plays for CBC. He founded Development Isle Madame and a community television station CIMC-TV, known as Telile. He was appointed to both the Order of Canada and the Order of Nova Scotia, and was awarded the Queen’s Diamond Jubilee Medal.

He spent decades as a successful freelance writer for magazines and newspapers, but by the 1990s, he wrote, “it was clearly time to abandon the field.” The rates of pay simply didn’t match the work involved.

He adapted with the times, and moved more into books and documentary film making. He founded The Green

Interview, a subscription-based service, from which stemmed film projects and a recent book, Warrior Lawyers,  profiling lawyers around the world working to give nature the protection of legal rights. He recently returned to a dream teaching gig, again focused on environment, at Cape Breton University, as the first Farley Mowat Chair in Environment, named after his old dear friend.

His accomplishments were many and diverse.  Every one of them was driven by the love of two things: a good story, and people. He wanted to make a better world for everyone. His diverse and profound impact show in the variety of people–activists, environmentalists, journalists, book writers–lamenting his loss via social media:

Journalist and environmentalist Silver Donald Cameron died Monday. His longtime colleague Linden MacIntyre joins us at 9:55am, to reflect on the legacy he’s left behind.

We are very sad to hear about the passing of environmental rights defender Silver Donald Cameron. A champion for protecting our communities. https://t.co/dV6vr6oRPg

We’re deeply saddened to learn that Silver Donald Cameron passed away today. Don was a warm spirit, an unrelenting voice for change—he inspired and encouraged countless people. We send love and support to his partner Marjorie Simmins, whose work often appears in this magazine. pic.twitter.com/y00ORYtHH0

We are saddened to learn of the passing of our dear friend and supporter Dr. Silver Donald Cameron. Don was an acclaimed journalist, author, educator, environmentalist and playwright. For more information on Dr. Cameron’s collection, please visit: https://t.co/r2zEz5bcqW pic.twitter.com/lT40djO8GD

RIP Silver Donald Cameron. The Education of Everett Richardson is the best book ever written about working-class struggle in Canada. pic.twitter.com/UwczcJgo5E

Very sorry to hear my old friend Silver Donald Cameron has died. Two of his stories stand out: A Herald column admiring the genius of rural engineers; and “Snapshot – The Third Drunk,” a poignant, and wickedly funny story in the Atlantic about a funeral in D’Escousse. 1/x

#NovaScotia, #Canada & #TheWorld has lost a big green giant. Truly a man ahead of his time. RIP Silver D. We’re sure going miss you. ?https://t.co/k9Y9KFd5z9

I am so saddened to hear of the death of Silver Donald Cameron. We had been communicating by email for a couple of years now and had spoken by phone for a profile of his Green Interview project. This was to have been the summer we finally met for a (socially distant) coffee.