Miss Confederation Brings Another Side of Canada 150 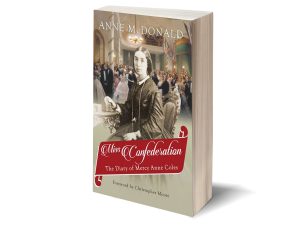 There are many sides to history, some which are often forgotten or ignored. In Miss Confederation: The Diary of Mercy Anne Coles, Anne McDonald attempts to bring one of the other sides to the forefront.

In 1864, the conferences that lead to Canada’s confederation were dominated by men, like John A Macdonald, Charles Tupper and George Coles. However, many of these men brought their wives and children along. Among Coles companions was his 26-year-old daughter Mercy, who kept a diary of what was happening around her during these proceedings.

Unlike the more stagnant, textbook version of events, Miss Confederation is a refreshing and honest view of these meetings and the Canada of that time. Likewise, key players like John A Macdonald are shown with greater depth than we are familiar with. Through Mercy’s eyes, they become more than just Fathers of Confederation and more than just a group of stuffy looking men in a photo. They become people; their significance remains that they are people whose decisions helped shape this country.

Another interesting addition to Miss Confederation is the comparison of the official diary with edited entries that once appeared in Prince Edward Island newspaper, the Guardian. This comparison of versions of events shows readers how a person’s own version of history, as they want it remembered, can change over time.

Miss Confederation is not without its faults. In places it doesn’t live up to its potential. Mercy’s words aren’t often given the chance to speak for themselves. Historical context takes centre stage, leaving Mercy’s observations to frame history as it is known rather than providing an alternative view of it.

Despite being overshadowed at times, Miss Confederation: The Diary of Mercy Anne Coles, is worth a read, if only to show how historical events and the collective view of them aren’t set in stone.