Reading a book, by its cover 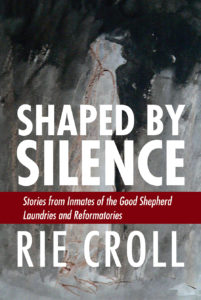 The poignancy of the title, Shaped by Silence, grows with each chapter in Rie Croll’s superbly written and important book, which seeks to correct the world’s ignorance about life for girls and women institutionalized in Magdalene laundries. The clever cruelty behind this system of oppression is shocking and frighteningly parallels the horrors of Margaret Atwood’s The Handmaid’s Tale.

With stories that include suicides and stolen infants, Croll reveals how the shame and silence imposed on these women assisted the church in maintaining a sordid legacy, dating back to the 1830s. She begins with a dense and clearly presented introduction of essential background and then seamlessly weaves additional research with excerpts from interviews with five former inmates, all survivors of the Magdalene laundries in the 1930s and 1960s.

Croll tells the survival testimony of Chaparral, born and raised in the laundry and abused by a priest from the age of 3. Her mother Delcina, a 13-year-old rape victim, was detained at the nuns’ discretion until age 18. The unwed mother story is common, but many girls were sentenced merely for being willful or socially inconvenient. Others were sent on the counsel of priests, under the guise of receiving a fine education, both moral and scholastic. The nuns, however, were unqualified to teach and most institutions had little time for schooling. Instead, inmates spent long days working, washing laundry for the church, hospitals and other paying customers. Frugality was emphasized, and the girls suffered for it. Injuries sustained in the laundries typically went untreated. Upon return to their community, these women were hopelessly undereducated, harshly stigmatized as “Maggies” and rarely successful.

Those who ran or were involved with the laundries were complicit in the rules that assured silence and anonymity among survivors. Assigning new names, often repeatedly, enforcing silence and forbidding talk of life outside stripped women of their identities, preventing them from finding each other upon release. The nuns’ relentless shaming, the trauma of solitary confinement and head shaving, among other punishments, and the enduring threat of being returned further discouraged many from ever speaking about their incarceration.

The last of the Magdalene laundries closed in 1996, ending 150 years of operation by the Sisters of the Good Shepherd and other Catholic orders. Claims, queries and lawsuits against the Roman Catholic Church have been met with denials by nuns and a frustrating lack of evidence due to poor record keeping.  Recently, Prime Ministers of several former British colonies have made public apologies on behalf of their governments for failing to protect these youths.

Despite the desperate experience of these women, the fifty plus years since their time in the laundries has allowed for considerable healing. Many now advocate for justice, demanding apologies from governments, while bringing together former inmates for mutual support.

Rie Croll has shone a harsh light on the Roman Catholic Church, whose dark practices inflicted on tens of thousands of young women made them forever Shaped By Silence. The need for citizens to learn about and acknowledge the wrongs committed by church and state is essential in the ongoing quest for justice. As with residential schools for First Nations children, the Magdalene laundries deserve broad exposure for the heartless shams they were and the intergenerational trauma they caused.  ■

Judy Donaldson’s roots are in Halifax. She is a ceramic artist, teacher and arts writer who has written reviews for Canadian and American magazines.