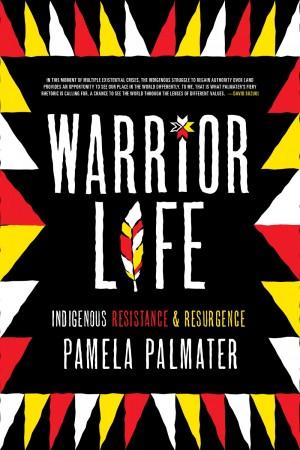 In the introduction to Warrior Life, Niigaanwewidam James Sinclair explains that in Anishnaabemowin, the word for warrior, ogichidaa, means a person “who dedicates their entire life to building, sustaining and protecting community.” Pamela Palmater embodies this practice in her life, and also in this book.

Warrior Life is a collection of Palmater’s essays previously published in journals and blogs, including Indigenous Nationhood, Lawyer’s Daily and Maclean’s. For this reason, some of the information is repeated from piece to piece, as Palmater lays the groundwork for each article.

When reading the book cover-to-cover, this repetition helps reiterate the most important issues faced by Indigenous folks across the country. The book is divided into five sections focusing on politics, racism, sexualized genocide, “Canada as an Outlaw” and resistance over reconciliation. Every piece in this collection is infused with Palmater’s considerable expertise as a lawyer, activist, professor, Chair of Indigenous Governance at Ryerson University and as a Mi’kmaw woman.

Palmater is very clear in her writing: she is not interested in empty promises for reconciliation from the Canadian government. Instead, the path forward is about resistance—resisting colonialism, racism and Indigenous erasure wherever present. She is particularly tired of lip service; the Truth and Reconciliation Commission report and the National Inquiry into Missing and Murdered Indigenous Women and Girls show us, “It is no longer up for debate. Canada is guilty of genocide … [this finding] is based firmly on the evidence and the law.”

Palmater argues that there is no use mincing words; the only path towards Indigenous sovereignty is to acknowledge the continued government-enforced harm done to Indigenous Peoples and their communities, and start listening to and providing what these communities need.

For me, the most searing pieces in the book were about the ongoing crisis of the missing and murdered Indigenous women and girls. My heart aches whenever I read about the racism involved in the disregard for these women’s lives.

I am disgusted and frightened by the perpetrators of this violence, and enraged by the institutionalized racism Indigenous people encounter so frequently, especially at the hands of the RCMP, local police departments and even in hospitals, where they can be denied the same care and empathy given to non-Indigenous patients, as we’ve seen recently in news stories from across the country.

Warrior Life forces readers to take a close look at the suffering caused by a settler society that was founded on the abuse of Indigenous People, and highlights the ongoing struggle against anti-Indigenous racism that is shamefully either not acknowledged or swept under the rug.

Rather than feeling defeated when reading about these injustices, Palmater asks that we channel this discomfort into action: we need to listen to Indigenous Peoples.

The last chapters of the book focus on the future of Indigenous activism and have a hopeful tone for the future.

Warrior Life is clearly an excellent resource for anyone studying Indigenous governance and Indigenous issues, but I think its audience is wider than that. Any settler living on this land has a responsibility to learn about Indigenous history and current Indigenous issues.

Pamela Palmater offers a laser-focused perspective in this book.

–Rachel Fernandes was raised in Ottawa, where she completed her Honours BA and MA in English at the University of Ottawa. She is now based in Kingston, where she is a PhD Candidate studying contemporary North American literature. Her research focuses on mixed race identity in various genres, including memoir, poetry and the novel.

Over the last decade, she has published a smattering of poems through small presses such as In/Words, Joypuke, Coven and Feathertale, and served on the editorial boards of The Ottawa Arts Review and The Lamp Literary Journal. She loves reading even more than she loves writing, and is excited to share and discuss new Canadian work.