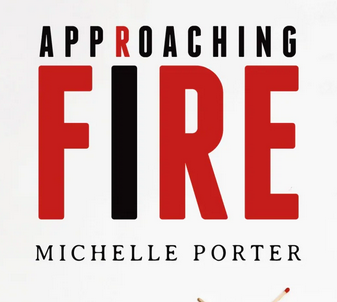 Michelle Porter is likely one of the most magnificent writers I have ever had the pleasure of reviewing; her mighty and metaphorical work compares the dignity and heartbreak of generations of Metis in the core of her identity, to the wildfires in her homelands and inside herself.

Porter proves adept at “braiding a river of stories” in a beautiful way, by accepting the traumas that are part of the fabric of her spirit, beaded into the soul of her from her Red River ancestors to the Atlantic Ocean. There are flammable elements that make up all of our lives. Porter’s prose, while sitting quietly, moves needle, thread and glass through the flames, to produce the petals of the Metis flowers, symbolic of the ways the homelands are reborn after the fires have raged.

Approaching Fire will surely provide the reader with the opportunity to grasp the struggles of identity that emanate from hundreds of years of racism, and the parallels with seething fires that rip across the lands and destroy tangible keepsakes.

Michelle Porter’s family story tells of hidden treasure, their identity in a time when colonial rule swept through her homelands like the fires, to eliminate the Nation. The word Metis, itself a European word adopted by the nation to describe itself, a word best not used if Porter’s great-grandfather wanted people to listen to his music and dance and revel in the very thing that screamed his identity. But his identity, like that of so many who came after, remained hidden, “caught between who you wanted to be and who you had to be.”

So many are now unravelling the  family history, in a time  when discrimination is still here and still tangible, when brown skin is still considered a threat, when perceptions are still swirling around family dinner tables and workplaces, when entire nations are stuffed like sardines in a  can into reserves or “land reserved for Indians,” when the word “Metis” in the author’s new homeland is a dirty word and consistently met with judgment, as it was back then, when the term “Indian,” “Aboriginal,” “Indigenous” can be a source of pride or a family thesis best left hidden.

Porter’s great grandfather moved his family from the Red River to the woods of British Columbia, where he was unknown; they were all unknown. She writes about cellular memory, how the women carried the cellular memory in their very beings and how the author herself carries the music that was her great-grandfather’s legacy to them all, to the family tree. Trees pressed inside bound books of paper, words that sang out her story; trees in the woods of British Columbia that burned ruthlessly as they are doing today in the Okanogan.

This is the cellular memory carried by the Metis that shares the common knowledge of the nation’s boundaries as social rather than geographical. Similar to how it is here, in Mi’kmaq Territory. Social boundaries, boundaries that have been pushed and pushed until the people alive and breathing in those lands were stuffed into the lands reserved for Indians.

From her great-grandfather’s 1930s musical life to his hidden and secluded life in the BC woods, Porter has devoured the tree within the pages. As she breathes in the smoke and ash from the tree of her life—her history, her story. She steps out onto the burned ground among the fireweed, its beauty and majesty, growing up and up and flashing lush pink flowers, containing medicines that will cure the headaches, the sniffling, the wounds. Fireweed, the wound healer.

Michelle Porter, in telling her family story has so beautifully compared herself to the fireweed, the beautiful growth after the burning lands. The healer, carrying the stories for her ancestors and the ones that will come after her, who then will hear the fiddles and feel the ground thump from the feet of the step dancers who shared the freedom of Bob Goulet’s fiddle. Share the dignity of a lineage from a “half-breed” man—a Metis man, Indigenous and European blood, Red River blood.

The fireweed winds itself around us all and heals our wounds after the flames of history have left their burns and scars, yet still transfuses the bloodlines of the brown skin or the paler skinned ones, and the truth settles into the heart and the cellular memory. Always.