Of writing and story: Putting it all together

Lynn Coady used to tell students of writing that “if you’re not having fun writing, you shouldn’t do it because what’s the point?” Since monetary rewards are elusive, a writer should at least write because she enjoys it. For Coady, her latest novel Watching You Without Me poses an exception to that advice.

Lynn Coady used to tell students of writing that “if you’re not having fun writing, you shouldn’t do it because what’s the point?” Since monetary rewards are elusive, a writer should at least write because she enjoys it. For Coady, her latest novel Watching You Without Me poses an exception to that advice. Cutting deeply into noxious literary reservoirs of aging, infirmity and self-doubt, Coady experienced “extended periods of misery” writing her most disturbing and emotionally demanding work yet.

In Watching You Without Me, erstwhile Maritimer Karen Petrie returns to Dartmouth, NS, after her mother’s death to care for her adult sister Kellie who has a severe intellectual disability. The novel is an exceptional examination of guilt and grief of loss and the relationships between mothers and daughters, but it turns the screw with the introduction of Trevor—an emotional vampire driven by anger and self-importance who inserts himself into the sisters’ lives as the ostensible professional caregiver of their late mother. Trevor is a great villain, a kind of junior to the likes of Iago, Stringer Bell and Count Dracula. But rather than dominate the artistic centre of the novel, Coady explains to me that “Trevor is actually Karen’s bogeyman. He’s like the ghost in the house. He is an avatar of all her fear and guilt and feelings of inadequacy. He’s not actually the thing; he’s the Babadook [emphasis added to represent emphatic vocalization].” Like the Babadook, Karen’s ambivalence toward her perceived failure as a daughter and a caregiver takes the shape of a monster—Trevor. 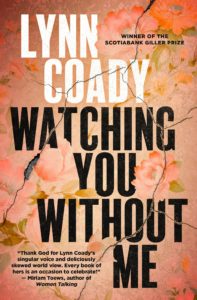 Coady has a profound understanding of the anger of men. Her readers will be accustomed to the violent, addicted, narcissistic men in her past work, and find fresh and unnerving explorations of the subject in Watching You Without Me. Coady explains that “narcissism, entitlement,” and “the need to be the centre of attention, the need to be special” are what drives men’s anger in her novels and short stories. Coady’s deepest dive into toxic masculinity was her 2011 Giller Prize-nominated novel The Antagonist in which Gordon Rankin “Rank” Jr. and his father tour the cavernous but ultimately finite pits of unchecked masculine anger. The reason why Trevor’s manipulation is such a reprehensible sort is not because it explodes spontaneously like Rank’s, but because he is always in control of it; it is constant “beneath the surface, like buried cables, humming with information.” Coady laughs when I ask her about the authorial imagination that is able to summon such an unsettling character, pointing out that Trevor is “calculating all the time. His anger motivates him. It’s behind every gesture he makes toward Karen and Kellie.”

The narrative is arranged in Karen’s mind according to shame. In her reflection, Karen explains that she spent “the days after [her] mother’s funeral flailing around for some kind of cosmic reassurance” that the future she plans for her sister is humane, kind and demanded a sufficient personal sacrifice of her own. She refers to her “pathetic gratitude” to Trevor as the moment for which she is most ashamed. Throughout the novel, Karen pulls back and describes the way her listeners have reacted to the story in previous tellings. “Whenever I get to this part,” and “people always stop when I get to this part,” she says, indicating that even after routine retellings, the story is still a story of shame. After “the scales fall from her eyes” and she has at least initially vanquished Trevor, Karen remains absolutely tethered to her shame.

In a way, the novel saves Karen from her shame. Karen tells us that “Trevor’s identity took precedence” in her narrative, but Coady doesn’t let the story be about him. The story instead focuses on Karen’s emergence as a self-determined identity—neither tragic nor triumphant. Moments of closure, when they do materialize, are “a hideous kind of closure” and “uniformly feel awful.” Karen’s story is about disentangling emotional toil from the work of mourning and grief—the kind of story that is nothing if not gradual and confounding.  ■