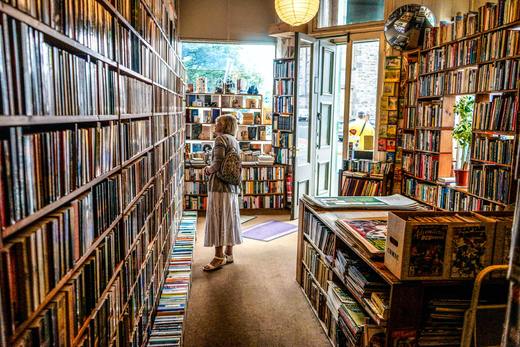 Handsomely illustrated with abundant photographs, drawings and distribution maps, Mammals is authored by distinguished experts in wildlife biology, zoology, forestry and resource management. These scientists are gifted writers whose prose is eminently lucid and enjoyable. Since most of these mammals inhabit other Atlantic provinces, this is a definitive resource for amateur naturalists, casual observers, teachers and students, and specialists throughout the region.

Another scientist with literary prowess is Orysia Dawydiak, a researcher for many years at the Atlantic Veterinary College, and among PEI’s foremost young people’s authors. Kira’s Crossing is the third volume from Acorn Press about an orphan adopted by a fishing family, who discovers she’s a mermaid born of merrow royalty. She encounters, underwater and ashore, a wide range of interaction among humans and other sentient species: from betrayal to loyalty, cruelty to compassion, selfish competition to cooperation and generosity.

In a suspenseful narrative, Kira faces the pernicious sides of two dominant realities: the entertainment industry and corporate science. Her ordeals as an “other” echo those of Indigenous peoples taken from their homes to become objects for scientific research and showbiz. Through all this, Kira is an utterly believable human-merrow, discovering herself through heroic devotion to kin and communities on the Atlantic and Pacific coasts.

Bren Simmers, transplanted from the Pacific to Atlantic coast, floats above water in Pivot Point: a memoir from Gaspereau Press of a wilderness canoe trip on British Columbia’s Bowron Lakes.

The friendship of three women, travelling companions, approaching middle age and in danger of losing their closeness, is one chamber of this memoir’s heart. Another is the interwoven challenges and rewards — physical and mental — of an arduous wilderness adventure. A third is Simmers’ self-aware confrontation with and embrace of her life’s transformations.

A talented poet and publications manager of Island Studies Press, Simmer blends lyricism and narrative energy with her knowledgeable sense of wonder in the natural world.

A profusion of poets, transplanted and home-grown, has been a PEI blessing since the 1960s and crowning of PEI’s Milton Acorn as Canada’s “People’ Poet.” Another literary giant is David Helwig, who relocated from Ontario to this island in the 1990s, and died in 2018. A prolific writer and recipient of the Order of Canada, Helwig sustained an equal devotion to poetry and fiction.

A House in Memory: last poems (McGill-Queen’s UP) is a selection by his daughter, Maggie, also an accomplished writer. While some high-volume authors sacrifice quality for output, Helwig demanded of himself the finest craftsmanship and heightened substance.

“It seems we’ve survived the years of our age. / There’s more to the story, / and however many times leaves come down, / each feels like forever.”

Helwig’s poems feel as if they can illuminate forever.

Among the most enduring and enlightening stories are traditional tales of Indigenous peoples. Julie Pellissier-Lush, a member of Lennox Island Mi’kmaq First Nation, is the current and first Indigenous Poet Laureate of PEI, with multiple honours for her work to preserve and promote Mi’kmaq history and culture.

In Mi’kmaq Campfire Stories of Prince Edward Island, illustrated by Laurie Martin and published by Acorn Press, she presents several “stories that were passed down from generation to generation,” often during summer celebrations and around winter campfires.

“Each story is based on a teaching,” she writes: “believe in yourself, be good to others, look after the world and nature, and so many more.”

This is a children’s picture book which will also be treasured by older kids and grown-ups who read with the young ‘uns.

A surpassing treasure of Island story-telling is folklorist Reginald “Dutch” Thompson. Dutch and his “Bygone Days” stories have long been a cherished feature on CBC Radio Charlottetown’s afternoon show.

At last, a wealth of those stories – set mostly in PEI but also in other Atlantic provinces – has been recast in print form in Bygone Days: Folklore, Traditions & Toenails. Many downeast residents have grown weary and leery of “quaint” nostalgia, and of what Herb Wyile in Anne of Tim Horton’s called the “touristic.”

Thompson avoids this pitfall. His narrative voice, tone and perspective delightfully honour the past without being cloying. His distinctive and lovable personality always yields centre stage to the experiences of Islanders whose stories he shares with irresistible humour and loving-hearted reverence.

American author William Faulkner famously said, “The past is never dead. It’s not even past.” Dutch helps keep the “past” vividly alive in the present.

Our immediate culture is vibrantly pulsating in Mathew Henderson’s second poetry collection, Roguelike, from Anansi Press. Henderson is one of the two youngest PEI poets to emerge recently on the national scene. The other is Chris Bailey, whose impressive debut volume, What Your Hands Have Done, potently explores in sinewy language his life and work in a fishing family and community.

Henderson’s 2012 debut, The Lease, evoked his summers working in the Saskatchewan oil patch and blue-collar experiences in nearby towns. His down-to-earth, savvy, and skilfully stylish language – think Alden Nowlan and Lorna Crozier with a Matrix infusion – permeates Roguelike with even more streetwise elegance.

Henderson is a gamer, and Roguelike is a 1980 dungeon-crawling video game. Roguelike blends video game culture with family narratives, especially his relationship with his mother and her narcotics addiction. Henderson’s poems strikingly connect fantasy, escapism and role-playing with the intermeshed and inescapable roles within families.

One form of fantastic escapism which confronts us with darker realities is the horror genre. When crafted with ingenious imagination, adept language and shrewd insight into human psychology and behaviour, horror stories can be edifying as well as gripping.

This is the case with Dave Stewart’s Monster Man, 27 “tales of the uncanny.” Stewart has been a horror aficionado since childhood, when he dressed as Frankenstein’s Creature for Halloween.

In classic horror fashion, Stewart transmogrifies commonplace situations into the grotesque, macabre or shockingly revealing: a neighbourhood children’s party, an email one hesitates to read, a skin rash, a musical earworm.

He also mines abnormal events to unearth how people respond unpredictably: Grace, fascinated by news of a serial strangler of women, leaves her bedroom window open and reclines seductively. Stewart’s bailiwick isn’t the supernatural. The horrors his characters experience – ordinary or aberrant — arise from their everyday environments and fellow humans, and quite often from within.

The horror story of the global pandemic has severely restricted our ability to escape to, experience and learn from other locales and cultures. Books resume a role they played in the years before trains, steamships and planes opened the world to travellers.

Broken Crayons, written by Patsy Dingwall and illustrated by Marla Lesage, is a sweetly inspiring children’s book about Ms. Gillis, a PEI teacher, travelling to and teaching in Kenya.

Dingwall, who lives on a farm, is a member of Farmers Helping Farmers, specifically, in Kenya. A retired special education assistant, she founded the School Twinning Project.

Broken Crayons opens with Ms. Gillis in her island classroom just before leaving for six weeks in a Kenyan school, reminding students to pick up and save broken crayons. The story then portrays, with gentle respect, the cultural differences she encounters, and which stir her to realize, “I came to Kenya to teach…but I think I’m the one who has a lot to learn.”

As PEI’s population grows ever more diverse, with thousands of newcomers from Africa, East and South Asia, and Latin America, Broken Crayons is a lovely homage to our richly transforming culture.

—Richard Lemm is an award-winning author and poet. He has been a faculty member at the Banff School of Fine Arts and is professor of Canadian and English Literature and Creative Writing at the University of Prince Edward Island. He is the author of several volumes of poetry, the short story collection Shape of Things to Come, and editor of two anthologies, Snow Softly Falling and Riptides: New Island Fiction, which won the PEI Book Award and was shortlisted for the Best Atlantic Published Book.