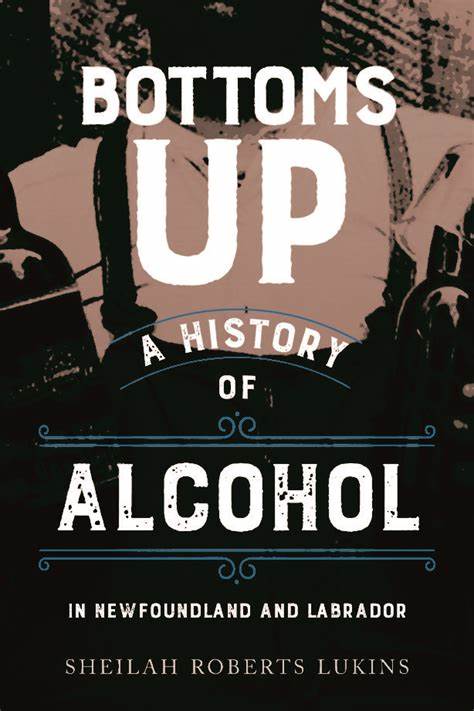 A taste of Newfoundland and Labrador awaits in Bottoms Up. Readers may be tempted to pour a cocktail of spirits or sleeve of craft beer to help settle in for a delightful reading experience. Residents and intrigued tourists can use the references to various lounges, taverns and pubs as a tipple tour guide.

Sheilah Roberts Lukins has worked her way through a rich archive to present a very well researched and documented local history of alcohol that is tough to put down. I learned the origins of the common expressions such as “to give a toast.” I learned why so many women have managed drinking establishments. And I learned the makeup of the notorious “Screech-in” ceremony–Lukin’s writing on the subject was worthy of an episode of The Rick Mercer Report.

Lukins begins with a deep dive into the necessity of alcohol in the 17th century. While water was contaminated in the time of dysentery, typhoid and cholera, drinking gradients of amber libation was a safer, more affordable feel-good option. Amidst a mistrust of water quality, British and Irish settlers erected brewhouses; children drank weaker ales. Other spirits, such as the favourite rum, were watered down to temper the impairment of seamen, earning it the moniker “grog.” A variety of health benefits and remedies were promoted.

But excess alcohol consumption could be costly. While fishermen would trade their catch for wine, port and rum by the thousands of gallons, merchants would profit and further drive the fishermen into debt. Young, male Irish settlers would carry over cultural norms, increasing the number of grog holes and spurring drinking culture along. Alcoholism and addiction were taking root, but the authorities were primarily concerned with the effect on law and order, labour and profitability.

As the situation grew dire, the temperance movement began, but faced a majority resistance. The push for prohibition emerged.

The latter sections of the book will be dog-eared go-tos. They detail histories of ownership and rebranding of pubs over the decades, listed by street, with a who’s who of global and local celebrities and musicians who made an appearance. Many bands got their start at Erin’s pub.

This is both a coffee table book and a library reference with many notable facts, images and stories that can be retold as part of our more entertaining Canadian heritage. In the spirit of the community building through raised glasses and hearty meals described in Bottoms Up, I will gift my copy to my favourite local long-table pub on the west coast, run by a delightful Irish-Canadian family.

Mala Rai is a poet, drummer, psychology student and technical writing hired gun on the West Coast. Her most recent poems have appeared in Eclectica Magazine, High Shelf Press and Anti-Heroin Chic. You can follow her on Instagram @malaraipoetry