Finding Avalon(Ages 12+)Pamela MacDonald with Valerie SherrardChocolate River Publishing When Avalon is hired on the spot at Party Portal things seem to be looking up, especially when she meets Pip, […] 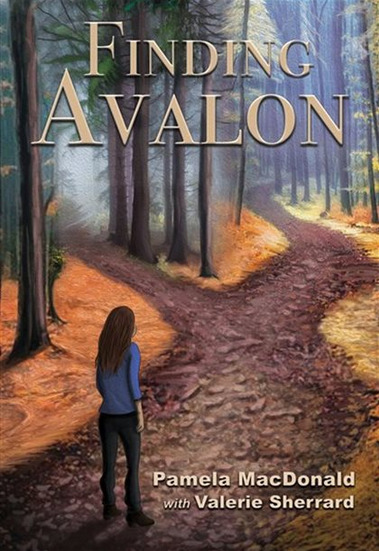 When Avalon is hired on the spot at Party Portal things seem to be looking up, especially when she meets Pip, her charismatic (and extremely handsome!) co-worker. But her excitement is overshadowed by anger when she gets home and finds a letter from her mother.

It’s been three long years since Avalon has heard from her mother, who has been in prison for trying to stab Avalon’s teacher. She reads the letter with hurt and resentment.

As their correspondence continues, Avalon’s mother opens up to her about her own painful past and the events that led her to this point in her life. Avalon in turn gets to express her own mixed feelings and misgivings about allowing her mother back into her life.

As she tries to juggle this new development, along with a possible new romance with Pip, a former schoolmate reveals Avalon’s painful secret (the truth about her mother) and she must also now face the disappointment of the friends that she has been lying to all this time.

New Brunswick native Pamela MacDonald explores the myriad of complex emotions that arise in families that grapple with addiction and the devastation it can cause. Avalon comes to understand her mother’s struggles, but also learns much about herself and how her inability to trust others creates its own problems.

Her intense feelings are both believable and realistically depicted, but her voice occasionally comes across as more didactic than authentic. Avalon’s father is a strong secondary character. Their relationship is a highlight of this story, as is the ending, which is hopeful but does not tie everything up too neatly.

Readers may long to know more about the betrayal that Avalon experienced at her old school but will be gratified by the support that she receives from her new friends. A thought-provoking exploration of family, friendship and forgiveness.

Lisa Doucet is the co-manager of Woozles Children’s Bookstore in Halifax. She shares her passion for children’s and young-adult books as our young readers editor and book reviewer.