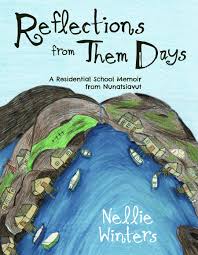 This residential school memoir is, at once, whimsical and unsettling in how it juxtaposes a childhood, forever disrupted by government-sponsored residential schools intended to assimilate Indigenous children into Euro-Canadian and Christian culture. Published in 2020 in English and Inuktitut by Inhabit Education, Inuit Elder Nellie Winters shares personal stories and illustrations from her time attending Nain Boarding School.

In 1949, at age 11, Winters sets out aboard the Winifred Lee, leaving home in Okak Bay, on the north coast of Labrador (now the self-governing Inuit region of Nunatsiavut), bound 400 kilometres south to Nain. The residential school Elder Winters attended until 1951 (when she was 13) was run by the missionaries of the Moravian Church, a protestant church based in Germany. Winters remembers the adventure of “them days” but also the heartache, for example, recounting how on the boat ride to Nain, the captain quieted the children (some as young as seven) by promising to throw anyone crying overboard.

“When you get to school in Nain it was strange, you know. You had to start over,” recounts Elder Winters in one of the book’s 11 stories, which also includes accounts of growing up in her Inuit community, Okak Bay. In language that’s true to Winters’ speaking voice, the book was transcribed and edited by Erica Oberndorfer, a post-doctoral fellow who came to know “Aunt Nellie” during frequent trips to Makkovik. That’s where Winters, now 83, has spent most of her life after her family was forcibly relocated in 1956, at a time when the provincial government shuttered a number of remote communities.

At times, the author’s sentences trail off, as would happen in recounting early childhood memories. The memories are complemented with Winters’ black-and-white sketches of landscapes and school children, often appearing with cursive writing, drawing attention to relevant landmarks, such as the girls’ schoolhouse or sleeping quarters.

The book’s cover features Cut Throat, detailed in the its second story, where the author spent summers fishing and foraging with family. The cover is particularly compelling in that it’s a seascape, drawn from the perspective of approaching the land from the sea.

So as not to interrupt the flow of the text, a glossary of Inuttitut terms is included in the footnotes. One of the first words we learn is Inuatsuk, a term of endearment, used to reference a midwife (“She was special to us, because she’s the one who borned me and my brother,” writes Winters). The midwife also used terms of endearment for the children she helped deliver, referencing Winters as Annaliak, and her brother as Angusiak.

In chapters titled, “The Boarding School” and “Strict Rules,” Elder Winters references the discipline that was common in residential schooling: “A lot of children spent half their time in the corners with their hands behinds their back. You wouldn’t have to do too much bad anyway for you to get put in the corner;” and “if some people do something wrong, they walk down to the Mission House and get the cat o’ nine tails, or something.”

Elder Winters references attending church twice on Sundays and says it was after her time that students were required to speak English, no longer permitted to speak Inuttitut.

Especially endearing are playful entries referencing how children made their own entertainment, for example, using sealskins for wintertime sledding: “sliding on the sealskins made them pretty. When you’re sliding it makes the fur right nice. Turn them around and you stop short, eh. That’s your breaks, the fur.”

She also recalls knitting and embroidering the popular inukuluk designs of Inuit figures at school. In her bio, which closes the memoir, we learn Winters became a prolific artist, experienced in multiple artistic mediums, mostly passed on through her Inuit upbringing and much self-taught. Indeed, Elder Winters, a mother to 11 and grandmother to 57, is one of the most influential artists in the Nunatsiavut region.

To read Elder Nellie Winters’ memoir, which is a book for all ages, is to better understand the history and impacts of residential schools in Labrador; as well as gain an appreciation for what it’s taken for survivors like Winters to keep their Inuit culture and community alive today.