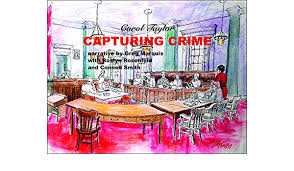 “If it doesn’t fit, you must acquit.”

Enter veteran New Brunswick court sketch artist Carol Taylor, whose book Capturing Crime showcases vibrant drawings from the numerous trials she has covered in the province since the 1980s.

Then a successful commercial artist whose portfolio included chic fashion illustrations, Taylor traces her career to a phone call from a local television station. Mindful of her skill at drawing quick portraits of patrons at a New Brunswick mall, the staffer offered her a job re-creating courtroom scenes. Rendered in pencil, chalk, pastels or watercolours, the still images were later featured during newscasts.

“The … work enabled me to further my practice, and I loved the immediacy,” Taylor writes. “… I loved the challenge, especially of sketching an initial charge or plea, or a verdict when the accused is usually there for only a minute or two.”

Her courtroom sketches for the 1985 trial of then New Brunswick premier Richard Hatfield reveal the stoicism of a politician who was charged with possession of about an ounce of marijuana that was allegedly found in his luggage at an airport. In addition to images of Hatfield, his attorneys and RCMP, Taylor drew a portraitof the garment bag implicated in the case. Wowed by her work, Hatfield (acquitted) requested one of her sketches, Taylor writes.

As with the suitcase, Taylor’s sketch of a constable guarding a bulky evidence bag during a murder trial transports readers right to the scene.  “Certain images seem imprinted on my brain,” she notes.

Taylor’s drawings of judges, jurors, lawyers and the accused are augmented by portraits of various expert witnesses who testified at the trials she attended. Among them: a forensic pathologist, a DNA researcher and a footwear specialist.

“One of the telling marks was a rusty nail that came through the insole matching the mark on [a boot],” reads the caption below her sketch of a shoe expert seated in the witness box.

Rest assured that the legal battles of New Brunswickers bearing surnames such as Irving and Oland are well-captured in this engaging release.