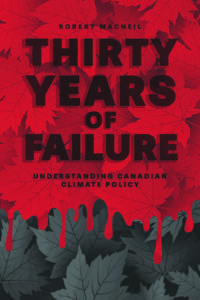 Robert MacNeil’s Thirty Years of Failure – Understanding Canadian Climate Policy takes on the political, economic, cultural and institutional roots of climate policy and is a substantial contribution to the subject in Canada. MacNeil, a senior lecturer at the University of Sydney (Australia), certainly has a breadth of knowledge and historical perspective to take on the topic.

MacNeil brings to bear an exceptional depth and breadth of the data on the subject and exposes how the confluence of societal and cultural factors, the federal organization of the country, our legal system and the bounty of natural resources Canada is blessed with, have conspired to hamstring efforts to control our greenhouse gas (GHG) emissions.

In a highly readable writing style, he outlines how Canada went from being a climate leader in the 1980s—hosting one of the first serious climate conferences in Toronto in 1988—to one of the “blocking states” in the 1990s, contributing to the watering down of the Kyoto Protocols, and leading Canada to becoming one of the most flagrant climate offenders in this century. MacNeil shows in disheartening detail how and why in 2016 Canada came to be ranked 59th out of 61 peer countries in the Climate Action Network’s Climate Change Performance Index.

The author outlines what has gone wrong but also gives
prescriptions for what must go right to maximize climate activism’s effectiveness and to bring about the long-term structural changes required for a sustainable and viable economy and regulatory framework. With authority, he details how provincial federalism, the nation’s electoral system, Canada’s legal system’s interactions with aboriginal land claims and the nature of the national economy have all conspired to create the situation that exists today.

Supported by a wealth of well-presented data, MacNeil describes and analyzes, province by province, what must be done to reduce GHG emissions, concluding with a haunting, yet well-known reminder: “… It requires reorienting our entire system of cultural values, and replacing them with ones not dependent upon ceaseless material growth… it requires not only imagining but demanding other possible worlds.”

Changing the world is a very high bar. To meet that challenge, and for anyone who wants to be a well-informed climate change advocate in Canada, this book is a “must read.”

Royce Winston, a recovering American (it’s one day at a time), emigrated to Nova Scotia in 2013, shedding his prior existence as a businessman (a man of numbers) and becoming a man of letters.