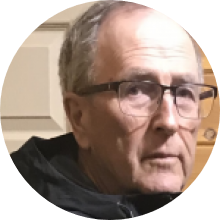 Floyd Spracklin was born in Buchans, a former mining towns in Labrador not long after Newfoundland became Canada's 10th Probince

Floyd graduated from Memorial University of NL(1972) and in 1995 earned an MEd from the University of New  Brunswick. He taught school and was a Principal and English Language Arts Department Head on NL's West Coast for 30 years. Since retirement, Floyd has been consulting and teaching for Academy Canada's various Labrador North Coast training and education programmes.

Floyd grew up surrounded by creative parents, a mother who crocheted, embroidered, knitted, and made pottery; snd a father who loved telling yarns about his younger years in Brigus and the spring seal hunt  and relating fantastic fishing and hunting stories.

So it is no wonder that Floyd has been writing and painting for decades and has numerous magazine and newspaper articles as well as theatre and book reviews to his credit. He contributed one chapter to Cassie Brown's Writing the Sea (2005). He edited and wrote The Foreword for Jennifer Yolanda Elms' Off the Rock: the Road Less Traveled( 2017) and edited David Wesley Sheppard's Orphanage: Life Changes Forever (2019).

In his spare time, Floyd enjoys hunting, fishing, hiking, and berry-picking with his wife and family at their Gaff Topsail cabin. He is also a hobbyist painter and uses mostly scenes from in and around The Topsails Plateau as his subject material.